From New York Times-bestselling powerhouse Roxane Gay, Ayiti is a powerful collection exploring the Haitian diaspora experience. Originally published by a small press, this Grove Press paperback will make Gay’s debut widely available for the first time, including several new stories. In Ayiti, a married couple seeking boat passage to America prepares to leave their homeland. A young woman procures a voodoo love potion to ensnare a childhood classmate. A mother takes a foreign soldier into her home as a boarder, and into her bed. And a woman conceives a daughter on the bank of a river while fleeing a horrific massacre, a daughter who later moves to America for a new life but is perpetually haunted by the mysterious scent of blood. These early stories showcase Gay’s prowess as “one of the voices of our age” (National Post, Canada). 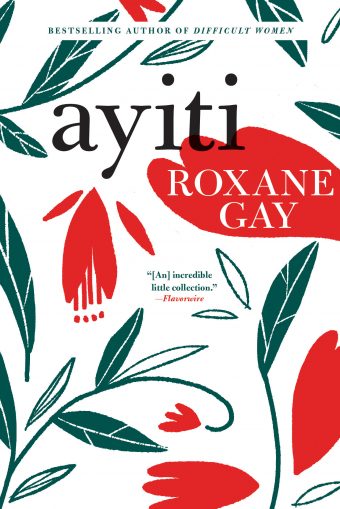 “
Drawing on her own experience, Gay’s emotionally powerful stories examine the complexities of Haitian identity, and what it means to be a Haitian in America. The US was once a yearned-for destination, but the reality of life there often doesn’t live up to expectations, as we see through the perspectives of a bullied 14-year-old, a student mocked about voodoo, and a man trying to make it in Miami.
“
Highly dimensioned characters and unforgettable moments . . . Dismantling the glib misconceptions of her complex ancestral home, Gay cuts and thrills. Readers will find her powerful first book difficult to put down.
“
With daily reports of two-year-olds forcibly removed from their asylum-seeking parents at the Texas border, it is easy to feel disheartened and utterly powerless, to feel that our country has been handed to the devil himself. Reading Gay’s work, holding it in our hands, can transport us from feelings of hopelessness to a place of empowerment. Ayiti draws our attention to immigrant experiences not represented in the nightly news and is a visceral reminder that we are better than our current circumstances — that change is possible.
“
A set of brief, tart stories mostly set amid the Haitian-American community and circling around themes of violation, abuse, and heartbreak . . . This book set the tone that still characterizes much of Gay’s writing: clean, unaffected, allowing the (often furious) emotions to rise naturally out of calm, declarative sentences. That gives her briefest stories a punch even when they come in at two pages or fewer, sketching out the challenges of assimilation in terms of accents, meals, or ‘What You Need to Know About a Haitian Woman.’ . . . This debut amply contains the righteous energy that drives all her work.
“
In “Ayiti,” Gay ultimately sets out to create an image of Haitian culture that needs more than just one short story, a poem or a novel to be fully developed. Gay complicates characters so that none of them feel as if they are type-casted, as she juxtaposes them one from the other just as their culture does.So long as people have to defend themselves, their culture and fight for human rights, “Ayiti” will be relevant.
“
An impeccably readable antidote to the patronizing news coverage Haitians have received in the past two decades.
“
“Ayiti” offers an exploration of the Haitian diaspora through a series of short tales that cut to the quick. This book is smart, emotional, and wholly brilliant.
“
There is a chance that Roxane Gay has published something great every day for the last few years. That’s why it’s shocking that—although this will change in 2014, when she has two books slated for publication—this incredible little collection is her only proper book to date. When we make a new version of this list in five years, we imagine it will include several of her works.
“
Haiti has long been the most interesting country in the Americas. Its [Haiti’s] better scribes, among them Edwidge Danticat, Franketienne, Madison Smartt Bell, Lyonel Trouillot, and Marie Vieux Chauvet, have produced some of the best literature in the world. Add to their ranks Roxane Gay, a bright and shining star. Ayiti is an exciting new chapter in an old and beautiful story.
“
Gay. . . rests her stories between worlds, where the unrefined meet the formal, where the beauty of poetic language is never fully swept away from the dirt and grit of honest and genuine moments . . . A debut that feels more like a veteran.
“
Gay’s characters demand respect, for themselves and for Haiti.
“
These are powerful stories written with verve and there’s this great sense at the collection’s close that nothing will stop the Haitian people, the human spirit, or Roxane Gay.